Teresa Solar Abboud’s first solo exhibition in Barcelona brings together new pieces as well as elements belonging to a set of projects the artist has been recently working on, namely her new film Al Haggara (The Stone). Sculptures, set props, photography and video form a composition in which all parts are related through concepts such as loss of control and layering. The works are organised around three agents: a sign language interpreter, a freediver, and a pelagic fish.

These pieces explore the materialisation of sign language, understanding language as an action produced through one’s hands. Its starting point was the controversy concerning Nelson Mandela’s memorial sign language interpreter Thamsanqa Jantjie who allegedly lost control over his hands and performed an absurd language. Is our body an opaque and unknown agency within ourselves able to operate independently as in the case of Jantjie? Are the terms mind, body, language, thought and experience, diplomatic attempts to occupy material and foreign territory?

The Dead Hand’s System
Collage, 2014
This work belongs to a series of collages that explore the stories of five characters who lose control of their limbs in different ways. The collage has been “updated” for the exhibition by adding another story to the existing ones.

White Noise
Ceramics, 2015
During the making of this piece the artist lost control over the linguistic signs she was applying to the clay. The piece is made of discarded letters from other pieces which makes the combination of letters meaningless. It is an estranged solidification of language, making visible an agency operating in each of us and over which we have no control. It can also be understood as a sound wave representation, as if the letters would stand for acoustic signals, or perhaps an immense growl.

The figure of the sea and especially that of underwater exploration are recurrent images in Solar’s practice. While space exploration is one of the paradigms of human progress, we have only mapped around 10% of our oceans, still standing as unknown territory which can be related with our limited knowledge about ourselves.

Freediving is an exercise that aims to reach a limit, a record marked by a tape measure. In free immersion apnea the diver plunges using a sled that overcomes the resistance of the water and should only focus in strictly controlling their internal organs and exercising the ears preventing them to collapse, while enduring enormous pressure and pain on their bodies. The free diver sets a strict protocol with the other divers examining their jump which entails a series of precise gestures indicating the dive is proceeding well.

This work analyses the story of Tanya Streeter who in 2002 broke the record of free immersion apnea in male and female categories reaching 160m depth. When she reached the 160m mark and in order to rise back to the surface, Streeter needed to unscrew an air valve which would allow her back up in full speed without effort, but due to the high pressure of the seabed and while suffering from narcosis she forgot the appropriate gesture system and how to open the valve and instead she made a gesture similar to “kissing the sea”. After a few moments of panic Streeter managed to open the valve and return back to surface.

Kiss to the sea, 2015
Video and sculpture in resin

The video shows Streeter exercising her breathing capability by moving her diaphragm while telling the story of the apnea record. The abstract image echoes an understanding of “language as modulated breath” exploring the morphology of the breathing apparatus and speech.

The sculpture mimics the free diver’s gestures of “kissing the sea” and opening the valve: two movements performed by two hands creating two pieces. The work has a sticky and moist texture, similar to that of something found in the deep sea or like a solid excretion born out of Streeter’s alienated gestures. As something akin to language.

The last section of the exhibition relates once more to the exploration of the sea but in this case with a more scientific approach related to the almost unknown areas of the deep oceans and the pelagic fish that inhabit them.

It is a fragment of a set made for the film that Solar has recently shot named Al Haggara. The structure is an interpretation of the canopy of the Annunciation by Fra Angelico, but was also influenced by Nut, the Egyptian goddess of the night, covering the ground with her cloak of darkness. Differently from the film, the canopy is not shown supported by columns but rather it is lying on the floor, sideways, like a kind of stellar shipwreck. The set is used as a surface, a structure that ultimately represents the absolute cancellation of any certainty, and any absolute ideas. This understanding connects with the inability to find a stable definition about what language is, on how it develops and where it comes from and therefore questions our place as communicating beings. On its backside, the structure is filled with different parts of film sets, adding layers of leftovers and waste that support the fallen sky, while echoing the deep scattering layer of the sea.

The photograph depicts the chaos of a fragile structure about to collapse. Several materials visible in the picture can also be seen at the rear of the set. The reflective fabric in the foreground mirrors the bladders of fish bouncing against the sonar and functioning as reflecting mirrors. 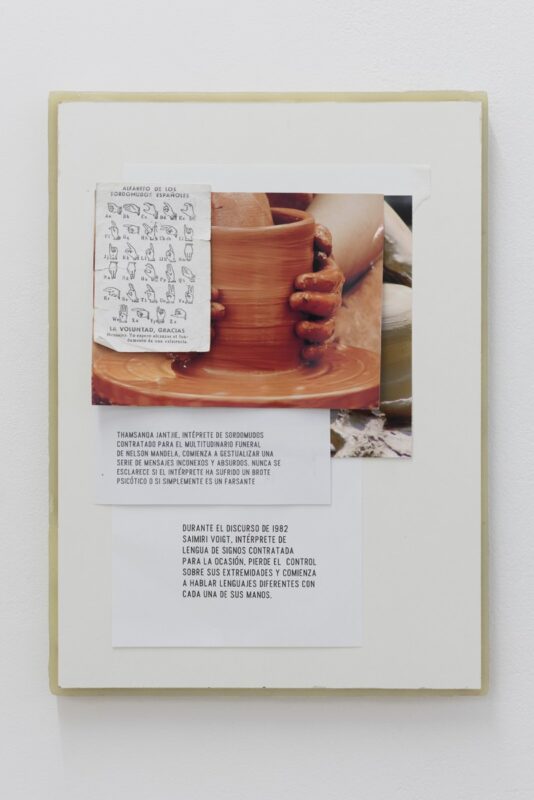 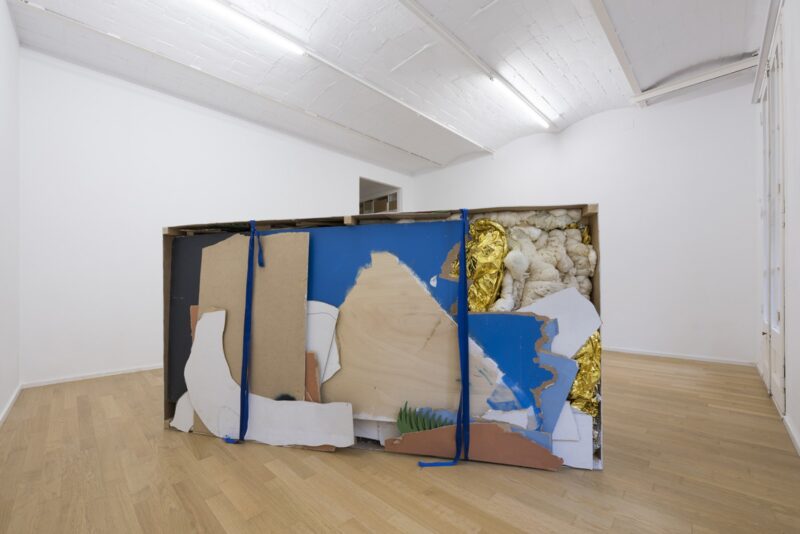 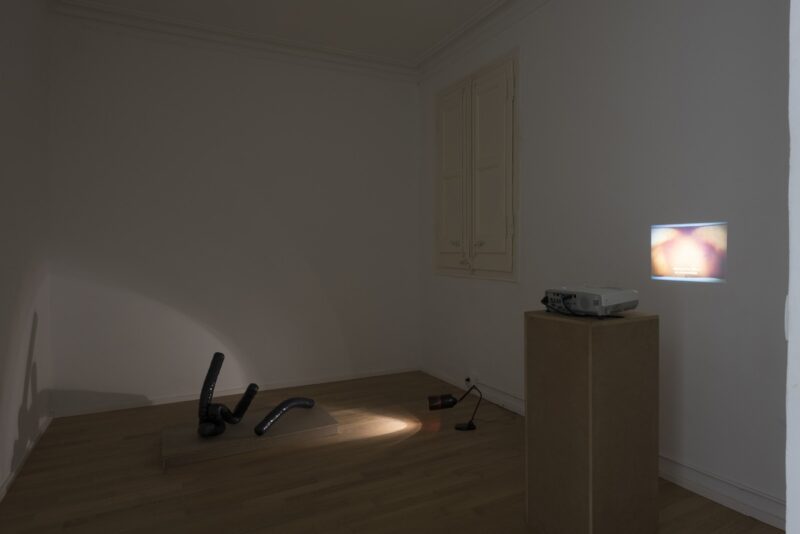 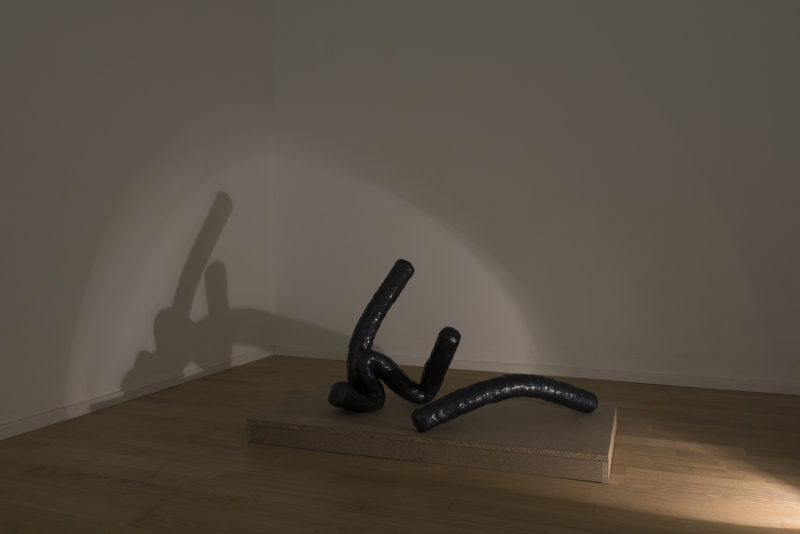 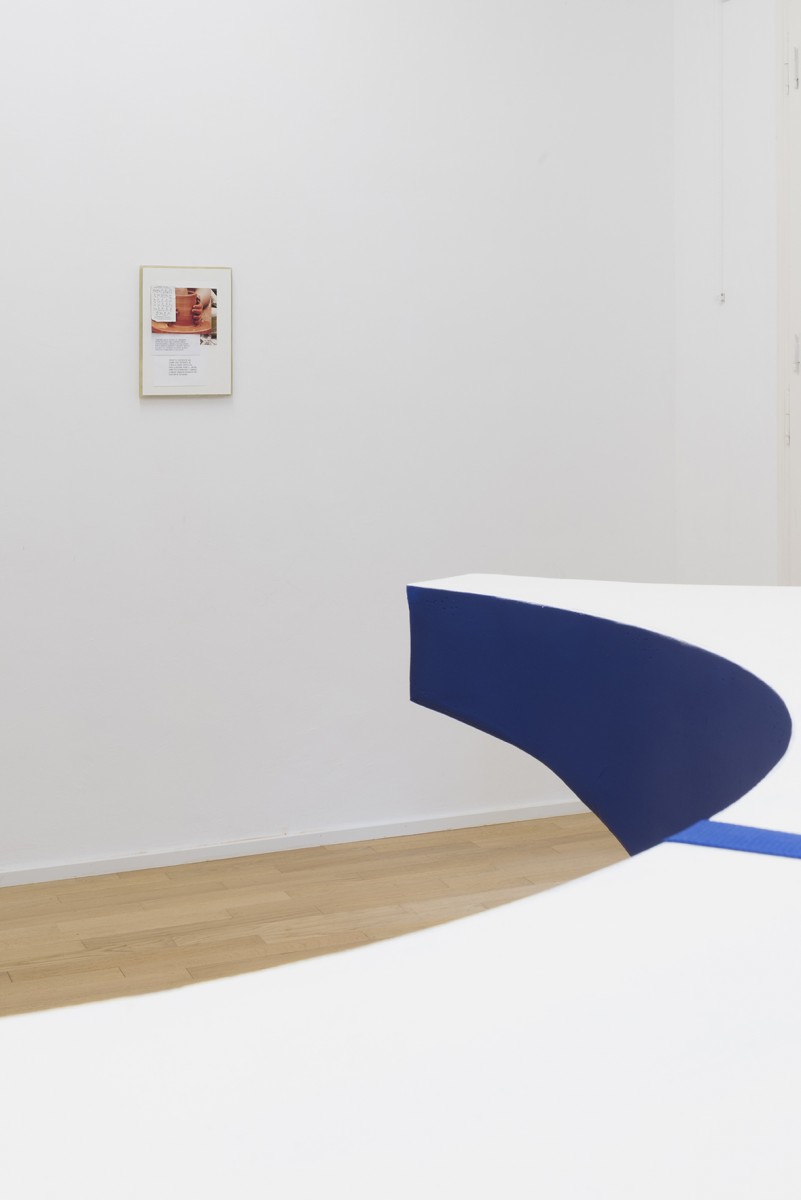 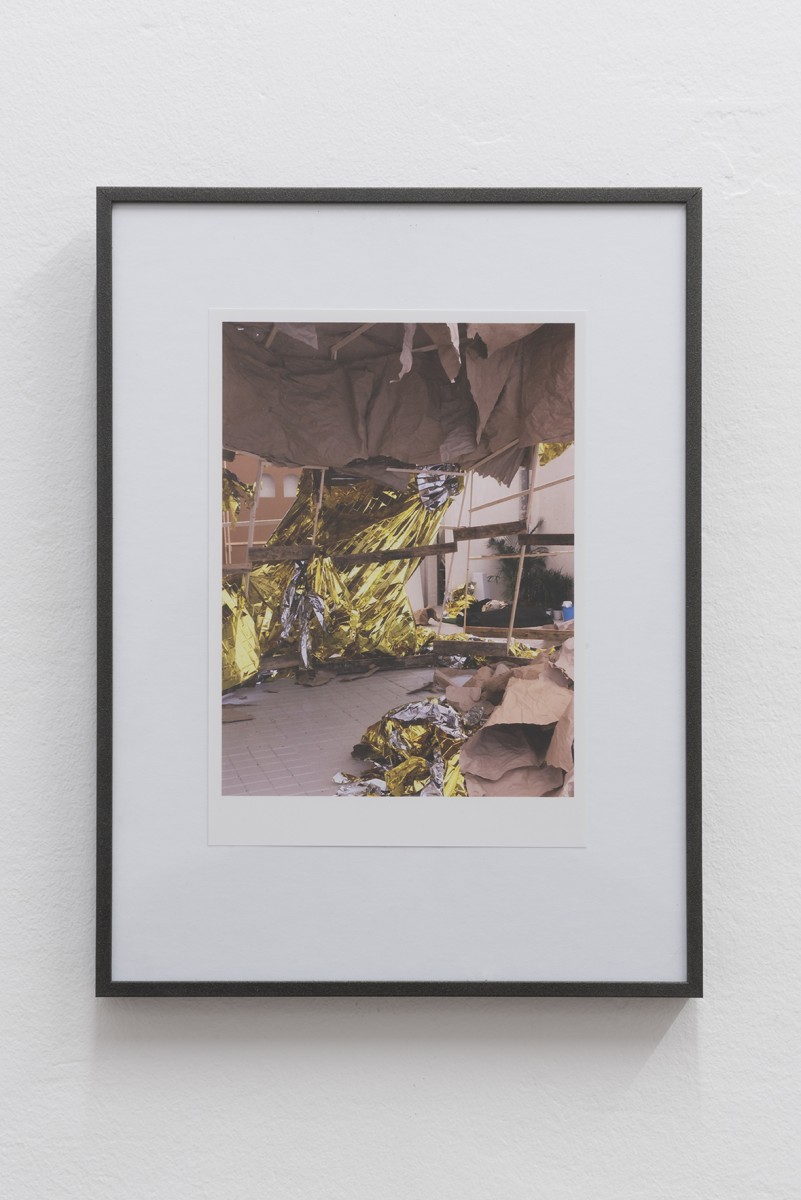 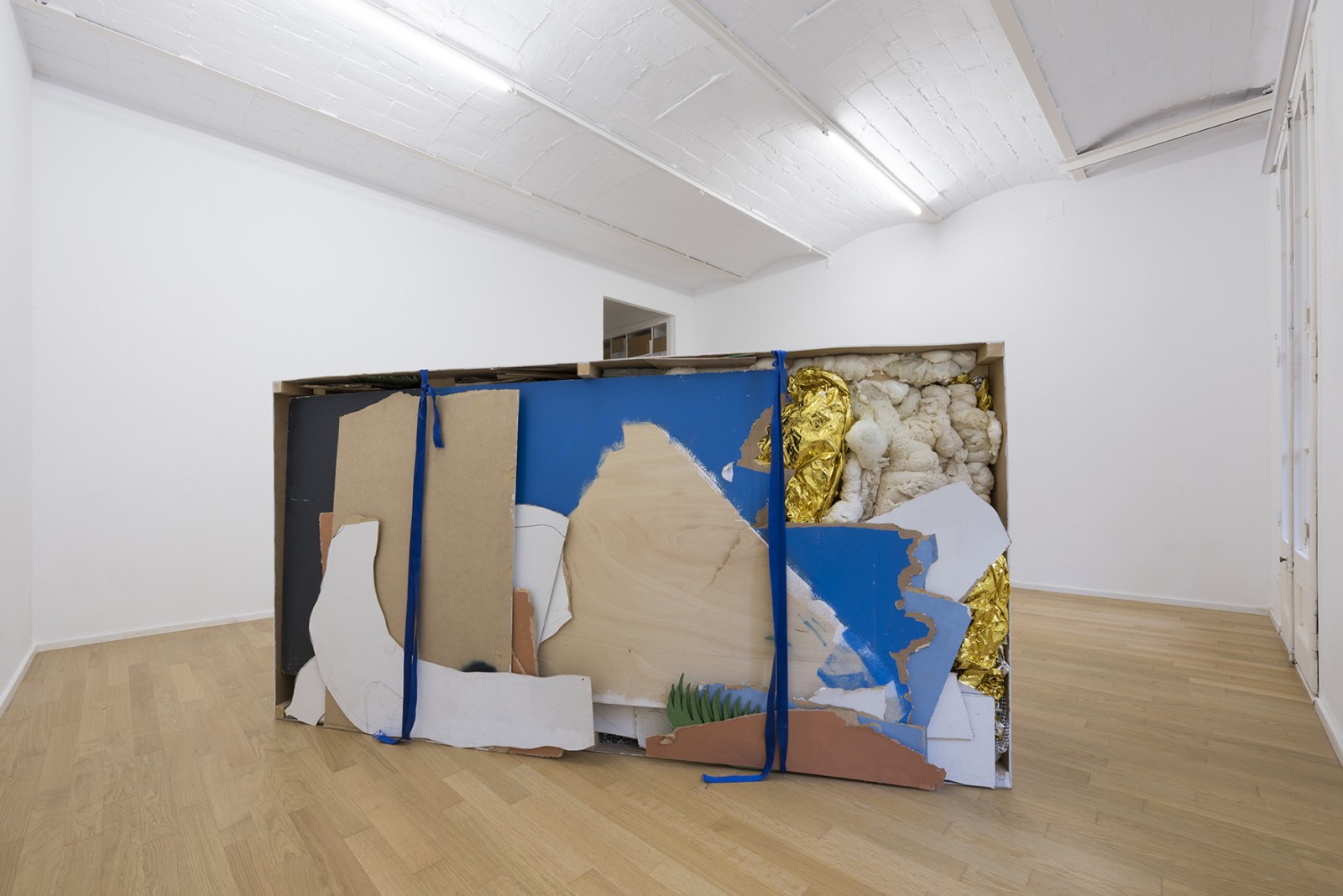