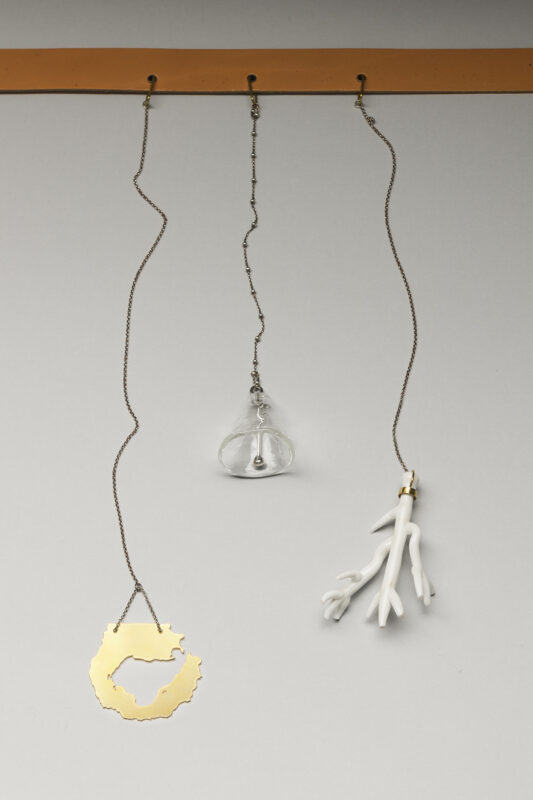 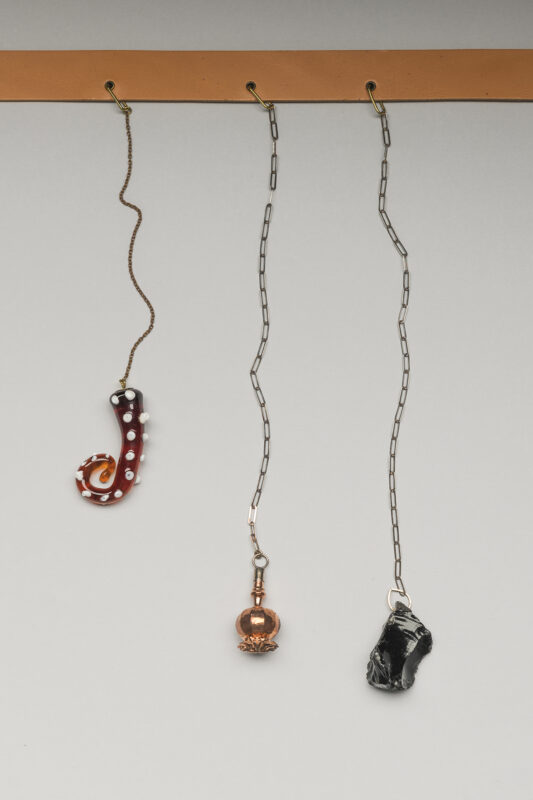 MATERIALS
Leather belt with closure and metal brass eyelets, from which hang 4 sterling silver chains with grey patina and one of brass with brown patina, from which different elements hang:
-A silhouette of a map of Deception Island made of brass plate laser cut and hand polished.
-A poppy seed covered in copper by an electroforming process, finished off with a custom-made silver cap.
-Two pieces of handmade glass topped with caps
made to measure brass.
-A piece of glass in the shape of a bell with clapper and silver setting made by hand to measure.
-An obsidian with a direct silver chain setting.

People constantly seek protection, uniting collectively with the firmness of finding support, sharing fears, beliefs, ways of life. Thus, we generate conceptions, magical universes, shared and transmitted rites that make us up as communities, that give rise to identities and vast material and immaterial collections.

We find in different cultures a kind of cosmos of beliefs in objects with defensive virtues against any human, natural or supernatural damage. Talismans that grant breath. This edition is a re-updating of some of those unique objects, which have been documented in many places in Spain from the late 16th to the 19th century. They are small ribbons or belts that were given the power to fight evil and protect its wearer, so that if matter and form were combined, by means of various amulets, their effectiveness increased.

In this case, we have reappropriated that imaginary to repopulate it with new amulets, symbols that trigger stories, tools loaded with the future that will have in their materiality a high utopian projection but also awareness of a reality in which the greatest threat is ourselves.
This edition has been made entirely by hand, studying each of the materials that compose it, with the collaboration of local artisans and with the advice of the artist and jeweller, Teresa Estapé.

The white coral, in blown glass, reminds us of life forms that are victims of slow and constant aggression. A climatic anxiety that begins slowly in a distant coral reef that is not small or unknown, it does not stop representing a symptom of slow violence.
The bell jar is repeated in her historical archetype, but it also reminds us of Sylvia Plath’s novel, the one in which the author recounts her descent into depression and her first suicide attempt. An issue that is the leading cause of unnatural death in our country and that still remains a taboo in conversations.

The obsidian pendulum leads us to the black mirrors of divination, to the tools of sacrifice, but above all to the polished black screens of our devices, portals through which we jump from world to world. A technology that replicates our identities ad nausea while many human rights are violated.

The map of Deception Island, designed in brass, refers to one of the strangest territories on our planet. A beautiful and remote underwater volcano, an island in Antarctica that, like the entire continent, constitutes a laboratory for the future to be protected, a silent witness to the intensive slaughter of whales during the past centuries. An Extremophile interface of Gaia.
The fruit of the poppy or poppy is the basis of the production of opium and its derivatives. Mythology tells that Persephone, goddess of the underworld, returned to collect poppies when she was kidnapped by Hades, who took her to hell. Since then, there would be no vegetation on the land during the fall and winter, while during the spring and summer life would return to the fields. This solitary and delicate flower is a symbol of fertility but also of lethargy and death.

The octopus brings us to the tentacular thought of Donna Haraway. That is, to the condition of ontological relationality that makes life possible. We are – with and we think – with. In the same way, from here we can jump to the proposals of Lynn Margulis who, from the theory of symbiogenesis, reminds us that nothing is independent in nature: species cannot unravel. This element is also in blown glass, made with great detail by Sara Sorribas, a great artisan and collaborator.

Her interdisciplinary artistic practice is characterized by research and development of processes aimed at the production of knowledge and hybrids objects. The critical analysis of the supposed objectivity of the devices of representation of science, as well as of the conditions of production of scientific knowledge is one of the main discursive threads of her work. From a methodical approach, she establishes complex networks of connections that are also nourished by the philosophy of science, the ecofeminism, speculative fiction, and terror, to give rise to theoretical, existential, and poetic displacements that operate from the fragility as a form of resistance.